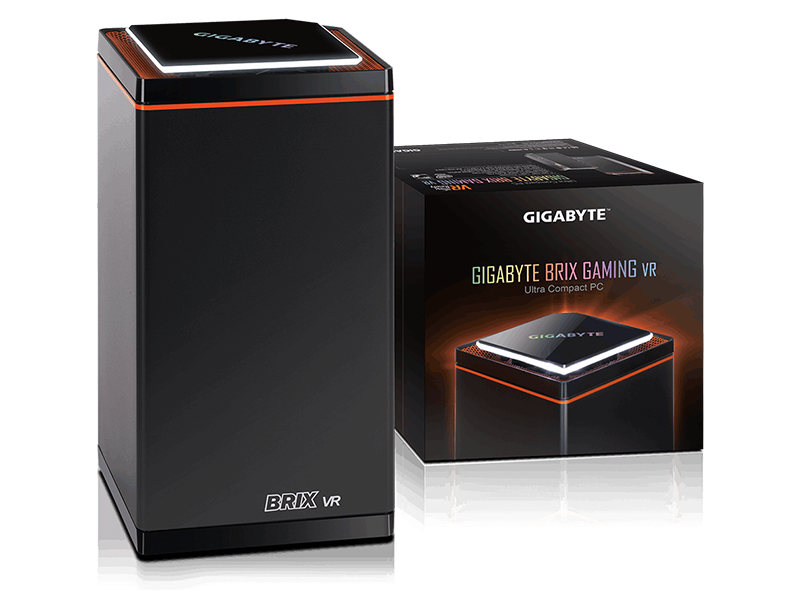 ComputerSalg AS er registrert i Norge, hvilket betyr Norsk MVA og ingen fortolling.
NOK 13.642,50
eksklusiv MVA 10.914,00
Totalt inkl. frakt 13.642,50
Legg i handlevogn
Send lenke via mail Legg til i liste Lagre til senere
Gaming Like You’ve Never Seen Before
The award-winning BRIX Gaming VR redefines the performance expectations of a Mini-PC, although compact it still retains its upgradeability much like its full-size PC counterparts. BRIX Gaming VR has a custom design that has a minimal footprint while still offering performance. Equipped with Intel’s® latest 7th Generation Core processors and an NVIDIA® Geforce GTX 1060, BRIX Gaming VR is the obvious choice for users who want to explore the realm of VR or experience multimedia from the comfort of their living rooms. Although it is filled to the brim with performance, GIGABYTE has enhanced the thermal design to allow the CPU and GPU to stay cool even under heavy loads.

All of these features and more can be found on this BRIX Gaming PC, it is designed to be the center of your home entertainment needs. Whether on a desktop or as a console replacement, this unit can do it all.

Gaming Powerhouse Powered by NVIDIA® Pascal Architecture
Armed with the NVIDIA® GeForce® GTX™ 1060, this PC is the ultimate gaming platform. This card is built on the world’s most advanced GPU architecture and incorporates technological feats such as 16nm FinFET technology, unprecedented high clock speeds and GDDR5 high bandwidth memory to provide the fastest, smoothest, most power-efficient gaming experience yet.

Thanks to its small size of only 2.6L and powerful hardware, the BRIX Gaming VR miniature PC is perfect for use in VR setups, especially for standing and “room-scale” VR. This Mini-PC packs a powerful NVIDIA® GeForce® GTX™ 1060 to provide next-level performance in both VR and 4K. Plug-and-play compatibility with leading headsets makes it easy to start getting immersed in the world of VR.

The New Standard in Compact Computing
With the BRIX Gaming VR weighing in at only 2.6L, GIGABYTE has been able to achieve the impossible. GIGABYTE has been able to build a PC that has a large variety of parts and components with performance comparable to a high-end gaming desktop PC. Not only that—its sleek and stylish design makes it suitable for any environment users plan to place it in.

Sleek, Cool & Quiet
From the looks of the exterior of the unit it's obvious that a lot of innovation went into the development of the GIGABYTE BRIX Gaming VR. Many hours have been spent on improving performance of the cooling system, thus we created this ergonomic thermal design that allows GIGABYTE to keep the system cool and at the same time as quiet as possible. The components within this PC were arranged to reduce air resistance to allow maximum airflow so the high performance CPU and GPU can remain cool even during heavy loads while the user is gaming or stressing the performance of the system. With all this innovation in the BRIX Gaming VR development we were able to reduce the acoustic level under peak load to a mere 35dB—quieter than sound levels in a library.

Connecting the Future —
USB3.1 in Type-A and Type-C
Versatility is one of the BRIX Gaming VR strengths, with multiple USB3.0 ports users can connect all of their devices directly to the unit. The BRIX offers the next generation of USB connectivity, with support for both USB3.1 standards in Type-A as well as the reversible Type-C.

Network Connectivity
The BRIX Gaming VR is designed to simplify the desktop PC as well as reinvent what a gaming PC is all about, wireless and bluetooth are included with this PC via a M.2 PCIe expansion card for Wi-Fi. This card conforms to IEEE 802.11 a/b/g/n/ac wireless standards as well as the latest in bluetooth technology, BT4.2. For enthusiasts who prefer the traditional method to connect to the internet GIGABYTE has also included an Intel Gigabit Ethernet port, supporting 10/100/1000Mb speeds.